If you follow “spiritual” guru Deepak Chopra on Twitter, you know how annoying he can be, especially when he feels challenged. He regularly gets into social media semi-feuds with actual scientists, and I say semi-feuds because most of his opponents don’t bother to reply. That leaves Deepak by his lonesome, furiously spitting out 8,000 (mostly nonsense) tweets with no response. It reminds me of grade school, when you could watch a bully self-destruct in real-time as his victim employed the effective tactic of simply ignoring his oppressor.

Jerry Coyne’s website brought the most recent Twitter semi-feud to my attention yesterday, this time between Deepak and rock-star English physicist Brian Cox. I’m a big fan of Brian Cox – he’s almost a perfect meld between Dawkins and Sagan in that he’s especially adept at expounding the wonders of science (ala Sagan) and equally intolerant of nonsense, woo, and superstitious thinking (ala Dawkins…also, Cox is British). Anyway, Cox ends the feud with a knock-out blow, what I believe the internet calls a “pwn”. Here’s the summarized feud (though you should check out some of the responses from followers of each):

1pm on the 19th, Deepak posts some of his regular science-sounding nonsense:

The next morning, Brian Cox, an actual scientist, decides to correct Deepak with this tweet:

Which unleashes a rapid pack of “Deepak crazies” who swarm Brian’s twitter feed (if you think Deepak is defensive, you should see his followers):

And all the while Deepak is of course tweeting out 9,000,000 of his own responses:

And tries to throw the hammer down with this one:

Which sets him up for this wonderful pwn: 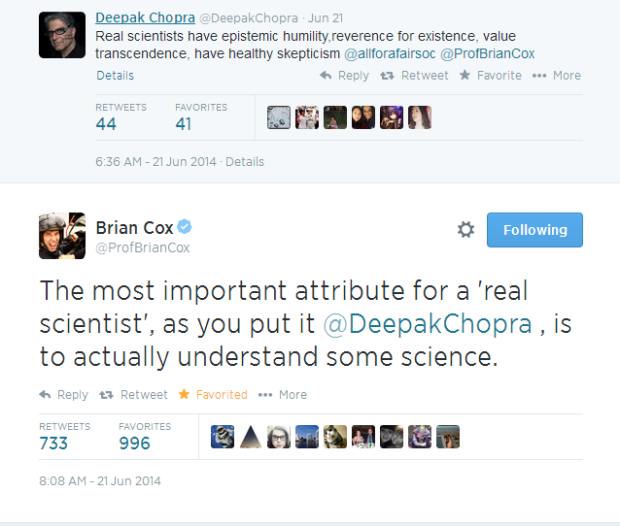